For those of us out here on the battlefield fighting every day to get the truth out against the mainstream media propaganda machine, the crackdown of Conservatives on social media has become a huge thorn in our sides. Google, Twitter, Facebook, YouTube, Instagram, Pinterest, and many more are cutting out our voices, ten-fold, ahead of the 2020 Presidential election. They know social media and the conservative digital army is a big reason why President Trump won in 2016.

It’s a targeted campaign, meant to shut out Americana in favor of the radical far-left ideologies that now influence everything including education, religion, entertainment and most importantly our culture. But what if this censorship actually puts lives in danger?

SSG Douglas M. Ducote, Sr., retired U.S. Army veteran and veteran law enforcement officer, is the Founder and CEO of ‘Veterans United For Justice,’ a not-for-profit organization founded to assist veterans navigate the complexities of obtaining their benefit packages and classification, as well as adjust back into civilian life. However, most importantly, it is a beacon of light in the darkness for those dealing with Post Traumatic Stress Disorder and thoughts of suicide. 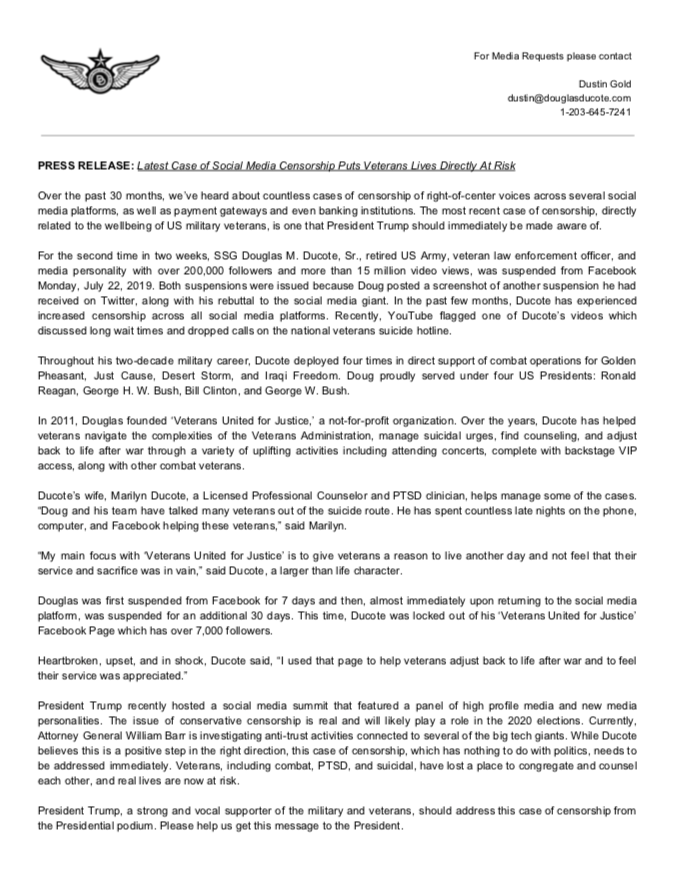 Diagnosed with PTSD himself, Doug knows first-hand the struggles veterans face upon coming home and is there as an advocate for them, as well as their families, who have nowhere else to turn. Doug explains his purpose for creating the non-profit, “My main focus with ‘Veterans United for Justice’ is to give veterans a reason to live another day and not feel that their service and sacrifice was in vain.”

Doug was recently suspended from Facebook for a second time in the last two weeks. This time he was locked out of his ‘Veterans United For Justice’ Facebook Page which had over 7,000 followers. Heartbroken and upset, Doug said, “I used that page to help veterans adjust back to life after war and to feel their service was appreciated.” These technocrats who are hell-bent on shutting down Conservatives are affecting the lives of veterans and others, crushing a vital lifeline! By eliminating Doug’s ability to reach the people he needs to help the most, that could literally save the life of a veteran, they have crossed a line that must be remedied.

Don’t miss Doug and fellow Army veteran “American Joe” on Friday, July 26, from 4-5pm ET, on Infowars’ “War Room with Owen Shroyer.” They will discuss this recent development and other veteran issues, as well as take your calls. 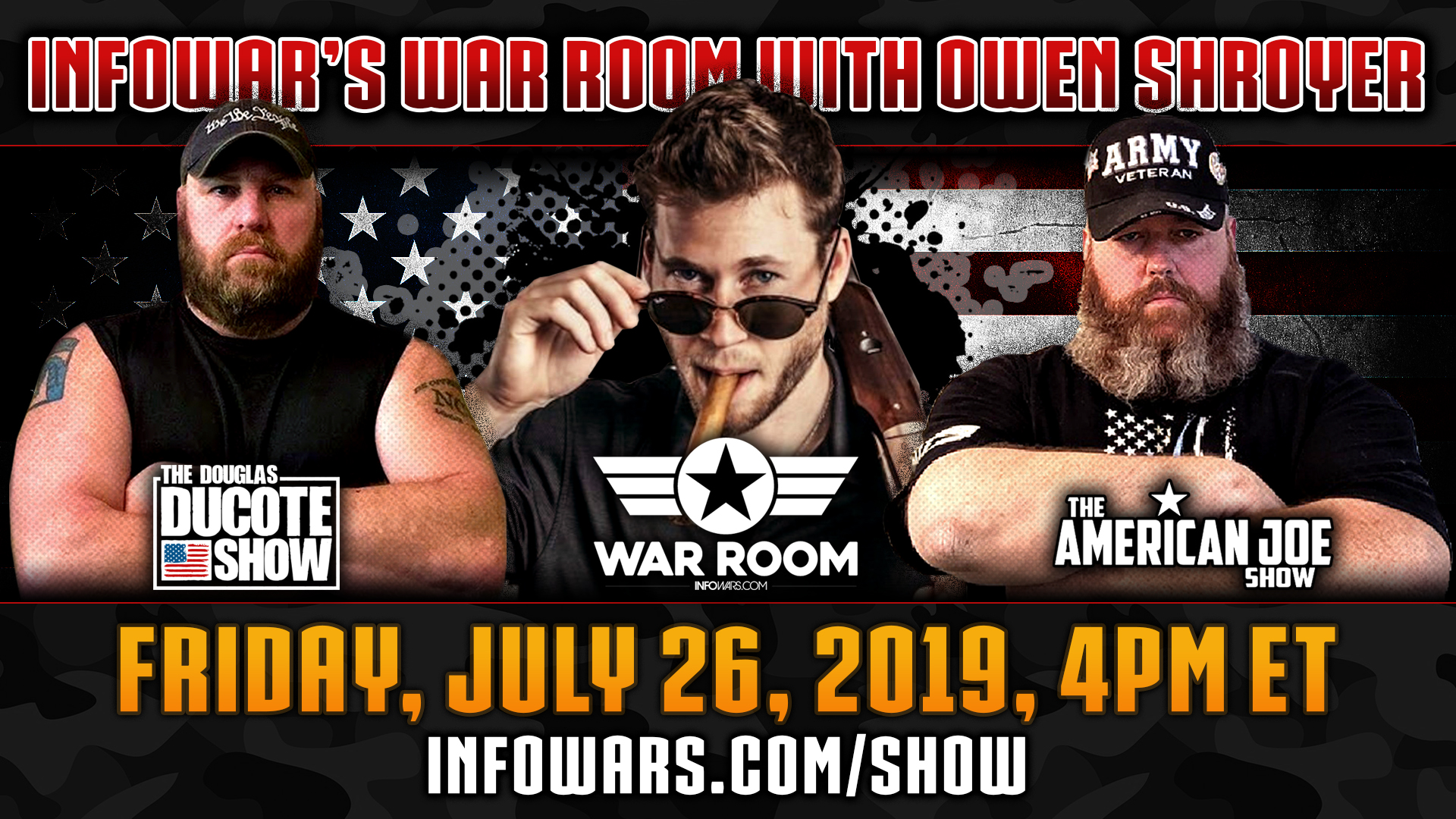 Then tune in to the “American Joe Show” on his YouTube channel at 9pET, where Doug will guest host as they continue their Patriot’s Unite two-night event! Two great Patriots, one great show! 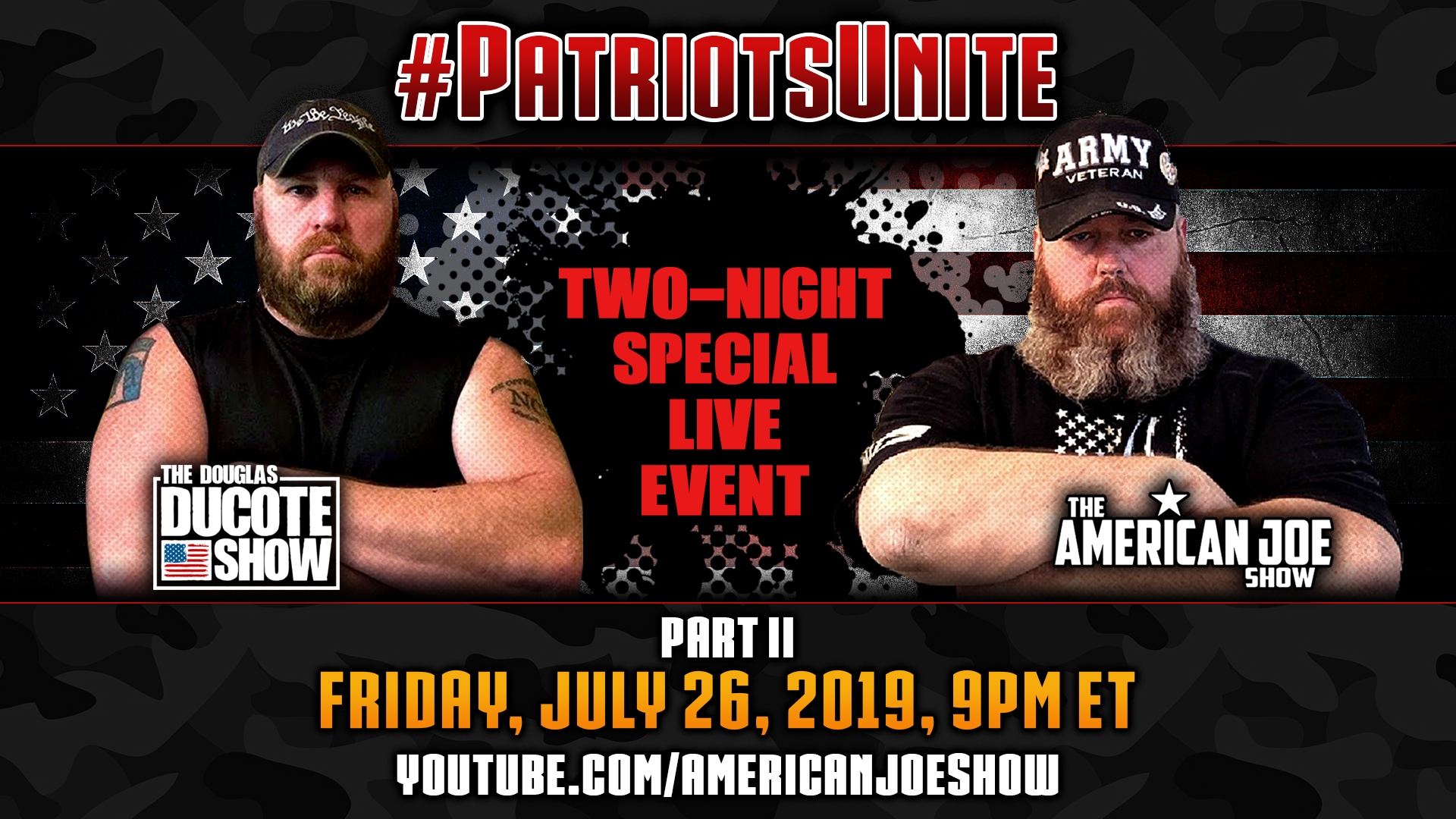 Be sure to sign up for Team Ducote’s FREE Newsletter for the latest breaking news, upcoming events and special investigative reports by going to www.douglasducote.com/subscribe.

Trump Under Fire Mueller Testimony- Another Nothing Burger

Keep Shopping
Send this to a friend
Here's the link. https://douglasducote.com/censorship/facebook-bans-veterans-united-for-justice-a-lifeline-for-suicidal-veterans/