The U.S. may lead the removal of Venezuelan Dictator Nicolas Maduro. The crisis in Venezuela has taken center stage as more violence erupted last week, with the Venezuelan people rising up against a tyrannical regime that refuses to leave its post. Now acting President, 35 year old Juan Gauido, has marched the streets of Caracas in a final battle to oust Dictator Nicolas Maduro. The Pentagon is making preparations to send the United States Military in the event it becomes necessary to physically remove him. This comes after the ruthless socialist dictator, on the advice of Russian President Vladimir Putin, refused to step down and allow Juan Guaido to take office of Presidency.

Nicolas Maduro came up through the political ranks within the Venezuelan government under President Hugo Chavaz, eventually serving as Vice President from 2012-2013 until Chavez’s reported death on March 5, 2013, when he assumed the office of the Presidency. A Special Election was held that same year, with Maduro running and winning under the United Socialist Party with 50.62% of the votes. However, his socialist policies decimated a once thriving country into a third world one as famine, disease, homelessness and lawlessness spread. Under Maduro’s dictatorship, by 2014 thousands desperate for a change in leadership, took to the streets in protest and many more started to migrate north towards the United States in search of refuge from the poverty and death created by a socialist regime. Although there was an election in 2018, the fix was in. He jailed any opponents and denied their names on the ballot in an attempt to keep his regime in power. Meanwhile protests continued and the United States, as well as 54 other countries worldwide, stood with the people of Venezuela in recognizing Juan Gauido as President of Venezuela as of January 2019.

Ironically the situation with Maduro echoes eerily back to a similar situation when the U.S. military had to oust Panama ruler Manuel Noriega in 1989. Interestingly, Noriega was a CIA asset from 1950 to 1989, who worked with U.S. Intelligence Agencies as their most valued source up until his removal.  He was the main conduit providing illicit weapons, cash and military equipment used for counter insurgency forces that the United States supported. Although he gained his fortune by running illegal drugs into the U.S., it was done with full knowledge by his CIA handlers. After he was ousted, he was indicted in Miami and Tampa, Florida for money laundering, racketeering, drug smuggling and after a seven month trial, was convicted in April 1992 and sentenced to 40 years in prison. 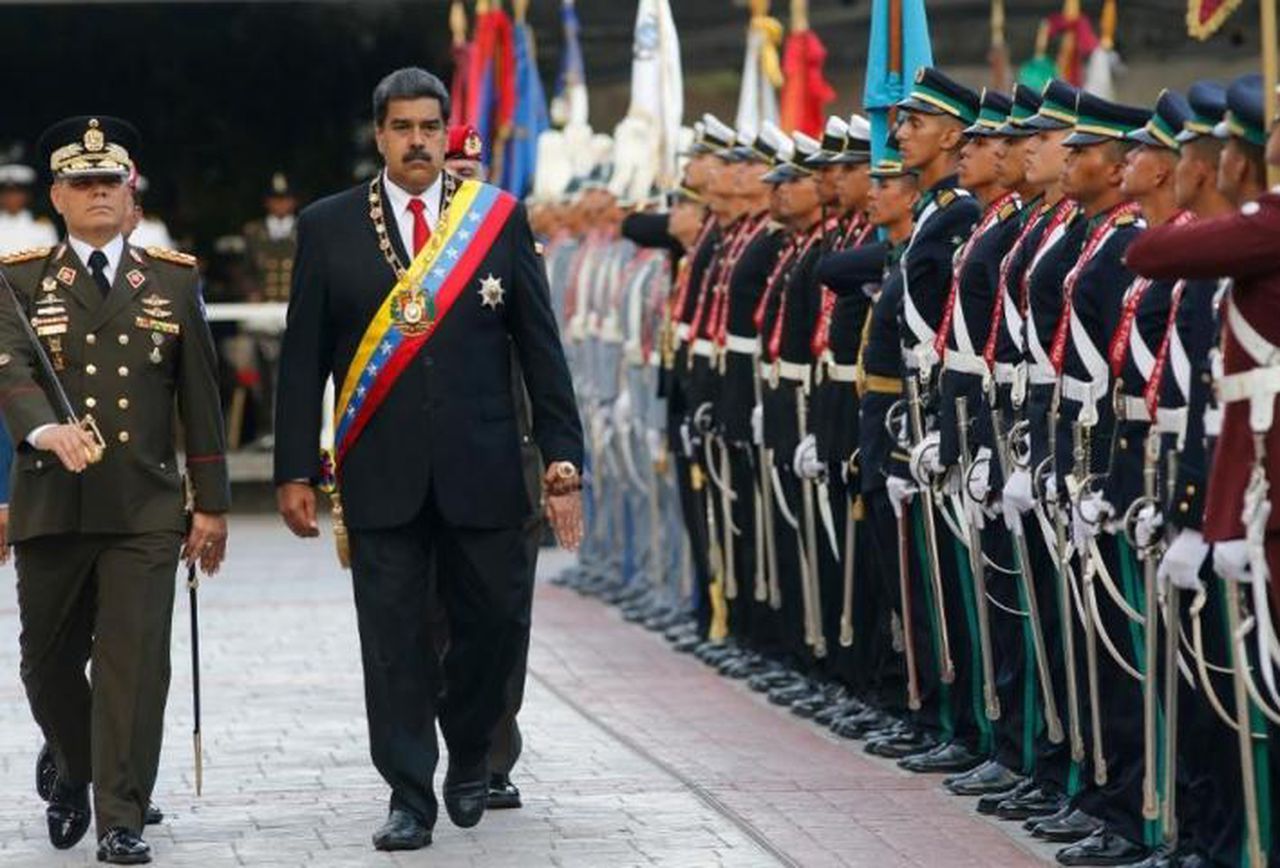 Veteran Douglas Ducote has served in four separate combat tours during his military career and was a part of the mission called Operation Just Cause to remove Noriega. Ducote recalls, “Our U.S. Military conducted an operation to take him out of power to allow the newly elected President to take it”. Unfortunately, by the time the U.S. got involved, Noriega had the President-elect Guillermo Endara dragged through the streets and beaten by his armed forces. The violence escalated to the point where Noriega began attacking U.S. Forces, which is why President George H.W. Bush made the decision to send our combat troops in to physically remove Noriega before a major war broke out.

This is something Ducote hopes to avoid with regards to the situation in Venezuela.  “South America is a powder keg getting ready to be set off”, Ducote describes. “The situation from what I see, as well as my brothers and sisters, Veterans I talk to on a daily basis, we see a mirror image of what took place in Operation Just Cause. Maduro’s regime brought in socialism, took an economy that was doing well and destroyed it. Nicolas Maduro needs to go”.

As the rhetoric from Maduro and his allies from Russia, China, Cuba, Turkey and Iran ramp up, the situation is becoming more dangerous by the minute and could cause a major incident unless the U.S. steps in immediately to deal with the situation.  Ducote agrees, “I have no doubt our Pentagon is working 24/7 putting plans in place to send U.S. Combat troops to attempt to take out this dictator. Problem is that Russia, Iran, China, Cuba and Turkey have sent troops down as well. They are already there.”  At this point it’s unclear how many armed troops from Maduro’s allies are currently on the ground, but according to the latest news, they claim they are setting up anti-aircraft batteries and missiles to deploy to shoot down American aircraft if we try to remove him.  Whether that’s true or not remains to be seen, but President Trump and Secretary of State Mike Pompeo are working with our allies, trying to come to peaceful outcome before taking any drastic measures. Having said this, there may be no other choice but to go in. Ducote adds, “The sooner we take action the safer it’ll be for our U.S. Combat troops.  I hope we don’t have to engage in combat in Venezuela but we have another Saddam Hussein, Osama Bin Laden type person hell bent on destroying his country and people.”

Earlier today it was reported Maduro had his armed forces literally plow through people to run them over, as well as shoot protestors.  It’s a volatile situation that appears to be getting worse.

What I find interesting, is that Maduro’s allies, Russia, China, Cuba, Turkey and Iran are all run by dictatorship.  Not only that, but I have my own suspicions that this smells a lot like a situation our Deep State-Shadow Government might have a hand in, as they try another tactic to undermine President Trump.  Not only will Trump have to deal with a possible, hopefully short-term military operation to free the Venezuelan people from this tyrannical ruler, but our own southern border is being invaded by illegals coming from places like Venezuela, Cuba, China and even the Middle East! We have a major crisis on our own border, yet our own military hasn’t been sent to defend it.

I have great concerns that the enemies of the U.S. have plotted a scheme in an attempt to lure us into war with a country in our own hemisphere. The fact that Russia, China and Iran are involved is frightening because they’ve clearly been given the ability to make nuclear weapons. Hillary Clinton’s Uranium One deal with Putin and Obama’s gift of $1.7B in taxpayer money to Iran, plus there was the Iran Deal, which enabled them to continue to building nuclear weapons. Anyone see a pattern here? Not to mention the fact the Chinese government has been stealing our technology and God knows what else thanks to Hillary’s open server. This is the type of situation that these anti-America, pro-Muslim and socialist countries dream of!

In addition, Ducote reports that Muslim Congresswoman Ilhhan Omar is condemning America, putting her ill-informed opinion in the mix. “To make matters worse Omar is siding with the dictator, against our President and doesn’t want us to be involved. She has no clue what she’s talking about, the history of this dictator, the history of Venezuela. She has no clue about America either, but here she is interjecting her thoughts, condemning our President”.

There is a lot to deal with but I have confidence that President Trump and our Secretary of State will do what is necessary to ensure the safety of all involved.  We cannot allow a ruthless dictator like Maduro to remain in power. Ducote adds, “I’m very concerned this is will be a situation can easily spin out of control. I do feel something has to happen with our military removing this guy soon because the longer we wait, more Venezuelan people will be killed. Thousands of innocent men, women and children are being killed by their own military and police forces. And the longer we wait the more Cuba, China, Russia, Iran and Turkey can set up forces down there to counter anything the US does.”

Be sure to watch Real World Witness LIVE Thursdays, 10pET for the latest on this story and other breaking news you won’t hear on the lame mainstream media.

Between The Lines: CW Network’s Roswell New Mexico Pumped With Political Correctness Our Modern-Day Battlefield: The War for the Internet with Dr. Dave Janda

Keep Shopping
Send this to a friend
Here's the link. https://douglasducote.com/geopolitics/us-may-lead-removal-of-venezuelan-dictator-nicolas-maduro/